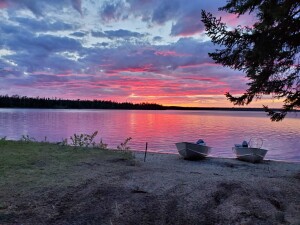 Leo Otto Shumaker passed peacefully on November 16th, 2020 at home surrounded by his loving family after battling cancer for six years.  He was born in Rehoboth, Ohio on November 25th, 1941, the son of William C. and Eula V. (Montgomery) Shumaker.

Leo graduated from New Lexington High School. After graduation, he worked at WOSUTV as a cameraman, often filming his favorite team, the Ohio State Buckeyes. He enlisted in the United States Navy in 1963 and retired in 1985 as a Chief Warrant Officer (CWO3).  While still serving he got a Bachelor of Science degree from College of Charleston.  After retiring from the Navy, he worked for Raytheon for 17 years as a Test Engineer for the guidance system for the Trident II Missile program.

Three things best embodied Leo’s life:  He was a dedicated military man, a devoted and loving family man and an avid fisherman.  He was very patient and gentle towards everyone. He had an amazing sense of humor, and his optimism persisted to the end.

He was a devout Catholic and was a member of Ascension Catholic Church since moving to Florida in 1987.  He was a faithful member of the Knights of Columbus.  He volunteered many hours at the Ascension Thrift Store.  He was involved with RCIA and CRHP.  He coached youth soccer for many years and was a mentor in the Big Brothers/Big Sisters program.

Besides his parents, Leo is preceded in death by sisters, Mary Tharp, Bessie Masterson and brothers William Shumaker and Crayton Shumaker.

In lieu of flowers the family has requested donations be given to Give a Child a Chance, which is directed by his son Keith in Burkina Faso, West Africa.  This program helps orphans and underprivileged children go to school.

Full Military Honors will be rendered at  Cape Canaveral National Cemetery on Monday, November 23rd at 10:30.

Any donations can be sent to and made out to Macedonia World Baptist Missions and marked Give a Child a Chance/Keith Shumaker:

Or donations can be done through paypal at:

Social distancing and mask wearing will be mandatory at the funeral mass and burial services.

To send flowers to the family or plant a tree in memory of CWO3 Leo Otto Shumaker USN Ret, please visit our floral store.